Mike and I were privileged to be invited to speak at the George W. Bush Presidential Center in Dallas on January 16. Our host was Kevin Sullivan, former communications assistant to President Bush. Sean O’Keefe, NASA’s Administrator during the Columbia accident, sponsored the event. Also on hand were Bill Readdy (three-time space shuttle astronaut and former associate administrator at NASA) and Ron Castleman (regional director of FEMA).

The talk coincided with the 15th anniversary of the launch of Columbia on her final mission. Despite the bitter cold, the reading room was packed! Mike and I were very sorry that our friends from East Texas were unable to attend the event because of the icy roads. We did our best to sing their praises.

Sean kicked off the discussion by setting the context for the security concerns for the mission—only 16 months after 9/11 and with Israel’s first astronaut on board. He also provided fascinating insights into President and Mrs. Bush’s concerns and care for the families of Columbia’s crew after the accident.

Mike described the incredibly empty feeling he experienced when he stood at the Shuttle Landing Facility at Kennedy Space Center on February 1, 2003 and realized that Columbia hadn’t shown up, and no one knew where the shuttle was or what had happened to it—only grasping that something must have gone horribly wrong.

Responding to a question from the audience, Mike outlined the challenges that launching a rescue mission would have entailed, had NASA known that Columbia was doomed. Sean vigorously affirmed that NASA would have launched a rescue mission had there been any indication that one was needed. Addressing the challenges of flying such a dangerous mission, Bill Readdy said, “There would have been a line of volunteers as long as the roster of the astronaut office to fly that mission.”

Mike and I also discussed the incredible support that the people of East Texas provided in responding to the immediate aftermath of the accident. We also discussed the seamless way that FEMA, NASA, and EPA led the federal response in the ensuing days.

The hour allotted for the discussion flew by!

And the fifty copies of the book that Mike and I had signed before the talk sold out within minutes. (Authors are always happy to see that happen!) 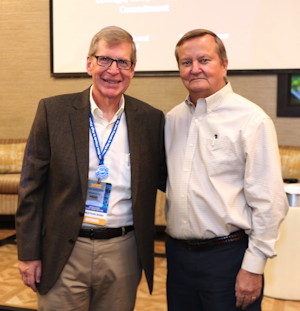