This is a follow-up to our post from July 22, 2017 (“Why Is the Book Taking So Long?“) in which we discussed how impatient we were all feeling about seeing the book in print.

The great new is: the book has been printed! We received the first shipment yesterday. It’s being shipped to booksellers this week, and it will be on the shelves in early January.

I took advantage of this happy event to recap what it took to bring this book to you. It’s just a brief snapshot of some of the milestones and hurdles that Mike and I as authors went through to put together a non-fiction book. (And many of my author friends have remarked about how FAST this book came about.) The milestones don’t take into account  the hundreds of emails, scheduling the interviews, checking facts, handling administrative issues, etc.

Oh yes, and sitting at the computer to try to write more than 1,000 words per day for a three-month period at the end of last year. This book has literally been my life for the past 981 days.

Here are some of the stats and milestones:

Mike and I set off on this journey on April 9, 2015 at 12:40 pm at Crackerjacks in Titusville, Florida. Here’s a photo taken right after Mike brought up the idea of a book about his experiences in the Columbia recovery and reconstruction. 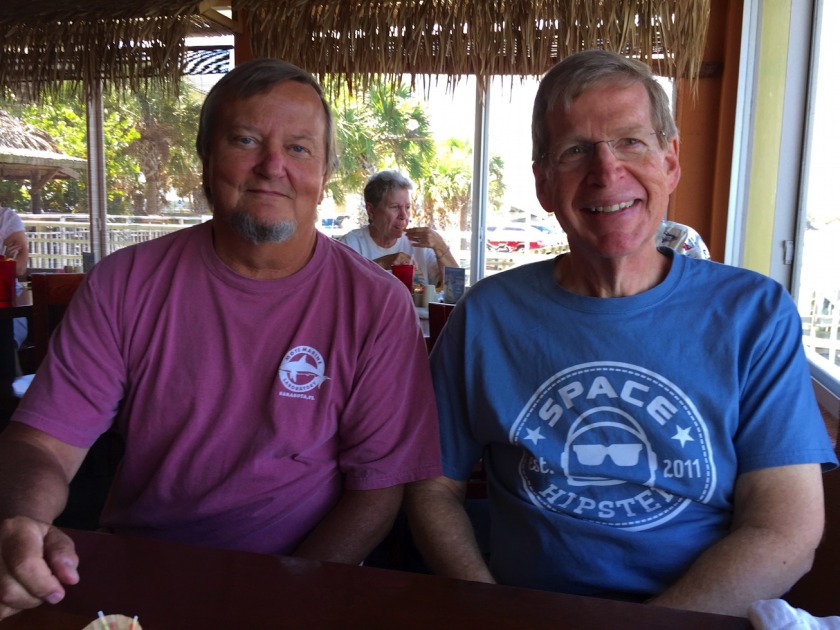 There aren’t words to convey how incredibly powerful this experience has been for me as an author. What an honor it has been to sit with people as they relived their experiences in what most of them called the most important thing they had ever done. Each person to whom I talked took a hero’s journey that ultimately resulted in contemplating his or her purpose on this planet. You don’t get any more real than that. There weren’t any casual spectators in this story. Everyone’s life was changed by the events of 2003 and their aftermath.

My life was forever changed by researching and writing this book. I hope your life will be changed after you read the story.

Mike and I can’t wait to hear how readers will respond to the book. We encourage you to send us your comments and if you feel so moved, to write a short review on our book page on amazon.com. You can also look for us on Goodreads.

11 thoughts on “A Dream Realized!”